The idea of having multiple apps on your wrist as appose to taking your phone out all seems a little strange to me.

But after using the watch for around a month we really took a liking to it and came to love the convenience of the watch, it also looks great and can be worn with almost any outfit!

Since the Apple Watch Series 3 release the watch has been selling exceptionally well, this is down to the high amounts of tech it has in it that can help you achieve fitness goals whilst looking stylish.

The watch comes in two forms, either cellular which offers connectivity to have internet access and a network, and a form with just GPS, both come with a new chipset inside.

What is strange is that even after a year of being released the cellular watch is only supported by EE and will cost an extra £5 on top of your standard monthly network tariff.

So the Series 3 looks remarkably similar to the previous Apple Watch Series 2, they really don’t need to change it as it looks great and is instantly recognisable on the wrist.

It feels comfortable on your wrist just like the previous Apple watches and even comes with a new sport wristband, which looks great.

What’s great about the design of the watch is that Apple has integrated the antenna behind the screen of the watch meaning it stays a nice size and doesn’t need to be any thicker than it already is.

Apple has also implemented an eSIM meaning that there is no actual SIM card which needs to be inserted or removed in the phone and it is all dealt with from the network provider. 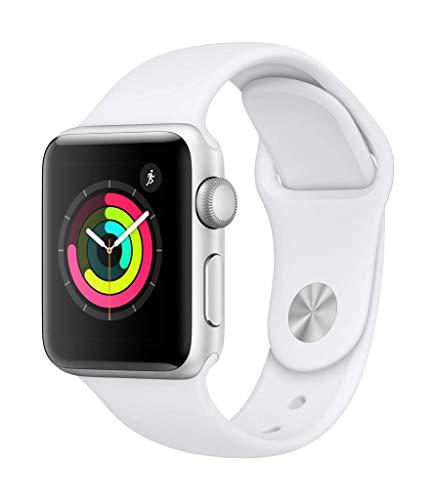 If you already have an Apple Watch Series 2 the only real exterior difference you will immediately notice is that the Series 3 has a small red dot on the digital crown, purely to signify that it is the newer model.

Just below the digital crown is a button which can be used to either bring up or dock your favourite/most recent apps, and just underneath the face you will find the optical heart monitor, speaker and microphones which all work very well.

The screen itself is a 1.65-inch (42mm) OLED retina display, its clear, bright and colours really pop.

When in low light situation the screen is great and we never had an issue with it over the time we had the watch.

Well, one small inconvenience is that the display will shut off after a while of not using it and you will need to flick your wrist to get the display back on again.

Apple has said that the display is made from ‘Ion-X strengthened glass’ which means its a lot tougher than you would think.

Although we were extremely careful with the review watch we used we have heard of people bashing them and there not being a single scratch.

The Apple Watch Series 3 is also waterproof up to 50 meters and can even be exposed to seawater, this thing is durable!

There were some pretty cool upgrades in the performance department compared to last years Series 2 watch, we now see a 70% faster dual-core processor meaning that apps load quicker and navigating around the watch is generally smoother.

However this is not as fast as we hoped and you will still come across the spinning timer from time to time, which is strange as the watch runs off a much faster processor.

So probably the best and biggest upgrade in the watch is the fact that Siri is now able to speak back to you when you ask it a question, this is a lot easier than having to read the screen especially when you need a quick response.

This makes for a better hands-free experience, all you need to say is simply ‘Hey Siri’ to start a conversation with the device and then ask it your question, how the weather is? What the traffic is like? Or even what the football score is.

When using the watch we found that the Siri feature was the most helpful part, you have quick access to almost any question you want, this is extremely convenient when driving, you do not need to take your eyes off the road for a second.

The watch does offer some pretty cool features, for example ‘Breathe’ where the watch will give you a nudge to let you know that you should spend some time deep breathing in order to relax and de-stress, this was a real benefit and allows the watch to keep you in check if your getting out of breath.

The watch has a ‘Taptic-Engine’ which can create vibration patterns to alert you of something that you set it as, for example 3 buzzes could tell you that’s its now 11 pm and time to go to sleep.

WatchOS4 is the new operating system for the watch and brings some awesome new fitness features, it knows exactly when you stop and finish your run and can give you all the statistic you need in order to make some serious fitness gains.

This coupled with the fact that if you opt for the cellular version of the device and take it with EE then you have access to over 40million songs on your wrist, which is great when exercising to just throw a playlist on.

The watch is great for monitoring your heart rate and will indicate anything abnormal to you either during your workout or when recovering.

We enjoyed the watch most when in the gym running on a treadmill as you have constant access to your heart rate so can really focus and try to keep it to a rate where you are in the optimal fat-burning zone, anyone who is big into fitness will love this watch as its comfortable, waterproof and a great fitness tracker.

The battery life of the Apple Watch Series 3 watch is pretty impressive and you can expect it to last you for over 2 days without needing to reach for a charger, even when exercising a lot and the watch is working hard to track your workout and monitor your heart rate.

When connected to a phone, the battery life is awesome and we found after an hour run on a treadmill it only drained 5% of battery, all while tracking the run and receiving tweets and Facebook messages from friends.

The watch does have a couple of tricks up its sleeve in order to keep you going for longer, It will go into a ‘battery saver mode’ when running low and then will only allow you to view the screen when a button is pressed.

Overall battery life is good but we still found ourselves topping it up every night just like we do with our phone just so we didn’t run into any problems.

So is it worth your cash?

Well if your someone who loves fitness or trying to lose weight then this device can certainly help you do that.

It’s a great watch to help keep track of your heart rate and will even alert you if it feels that something is wrong.

However the Apple Watch Series 3 is not cheap, but it does offer some great value for money.

The watch looks great and can be worn stylishly with almost any outfit and its great to have access to 40million songs at the flick of your wrist.

That being said if you’re looking for something which offers a little more then you should check out our Apple Watch Series 4 review as this is brand new and offers slightly better value for money.

A great accessory for anyone who owns an iPhone XS, or any iPhone for that matter, as it can really help you achieve your fitness goals and manage everyday tasks.