The iPhone SE was released in March 2016, although this was a while ago now it is still selling very well at the retail price of around £300.

In this iPhone SE review, we give you everything you need to know and also showcase the best iPhone SE contract deals in the UK.

The phone is no longer available in the 16GB and 64GB models so now there is only the 32GB and 128GB option.

The iPhone SE performance won’t blow your socks off, but it is enough to run everyday tasks smoothly without any interference, but more on that shortly.

Whilst the storage sizes have increased the price is surprisingly low, the key selling points for this phone is definitely the design as it is the same size as the iPhone 5 or 5S, some people prefer this as it fits easily and comfortably in the palm of your hand.

Check out the best iPhone SE deals in the UK.

The iPhone SE design is simple and clean, Apple is basically giving customers a smaller flagship smartphone with all of the benefits of a 6 or 6S, the design of the phone is very square and feels easy to grip in you’re hand.

The design is very much recycled from the 5 or 5S and the only difference in design is purely the colour options for the phone and the small SE logo which stands for “special edition”.

Because the phone is so small it is great for people who have small hands, it is very easy to reach all four corners of the display with just you’re thumb, the phone is a little bit lighter and fits easier in you’re pocket.

There are some disadvantages of having such a small phone though, one of which is that the display is only 4-inches, meaning that when you’re watching videos or gaming on the phone it doesn’t quite give you the same feel as what you would have on a bigger smartphone. 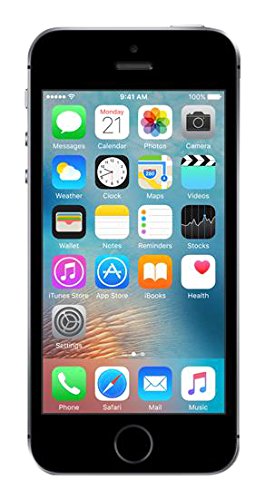 The iPhone SE design feels very premium, due to its metal chassis, when glancing at the phone it really does look like an expensive bit of kit.

However, one flaw we did notice is that when shaking the phone it seemed to rattle, although this made no difference in performance or anything so we assume Apple know about this and aren’t too bothered, it is pretty irritating though.

When it comes to the iPhone SE performance, it does have a pretty high spec considering its size, you do get the A9 chip and 2GB of RAM in the SE which allows for very smooth navigation around the phone and in and out of apps.

However the fingerprint scanner is slower than current models but this is not very noticeable, this is an example of the small sacrifices you’ll need to make if you go for the SE over the iPhone 6S or another larger model.

The way the phone has been put together is simply great, all of the buttons feel really good when pressing them from the volume buttons on the side and also the mute button, it feels like Apple have really honed in on getting them perfect.

The iPhone SE only has one small speaker which is at the top of the phone, which we feel doesn’t give it the best sound quality and is not very good for watching long youtube videos or movies.

With the phone having a retina display it really does struggle to display HD movies even at the lower end.

The camera upgrade on the SE is from the iPhone 6S as it now has a 12MP (which comes with Focus Pixels) sensor and a slightly smaller aperture means the SE can take very similar photos and 4K videos to the iPhone 6S which we think is fantastic.

Although there is no optical image stabilisation, the autofocus is very quick and it has a quick shutter which is used in other model smartphones.

The front-facing camera, however, does have a weak 1.2MP lens, so if you’re a big selfie person you might want to look at a different phone.

What we like about the camera on the SE is that it is actually flush with the phone thanks to its bulkiness, which rather than the iPhone 7 or 8 etc does sit flat on a table with no wobble.

The surprising thing about the SE is the battery life, as it does have a small 1640mAh battery, the life is pretty good due to the A9 chip, we found it would last around a day and a half of casual usage.

Apple has also implemented a ‘power saving mode’ which will appear when on your last 20% in order to give you a little more power in when in them sticky situations.

Overall the battery is average but it’s not a major downfall considering that it can easily last you a day of usage, and more if used wisely.

Overall, this is a good solid phone but there is certainly better value for money phones out there, this phone would be ideal for kids, or elderly people as it is simple, easy to use and just a basic iPhone.

Thanks to the iPhone SE design being rather basic and simple, this helps for those with small hands and makes the phone an ideal candidate for the elderly or young children.

The phone does have some good attributes such as the camera, design and performance, allowing you to be very smooth when changing apps and navigating around the phone.

The iPhone SE performance aspect won’t blow you away, but browsing social media, reading and surfing the web are all easy tasks for the phone.

As it is now 2019 you may want to take a look at some of the more modern iPhone before you make a purchase, for example, the iPhone 8 or iPhone XR.

We hope you have enjoyed our iPhone SE review, and be sure to check out the best iPhone SE deals in the UK at the top of the post.