The first thing that you will notice about the Samsung Galaxy A9, is that it has a whopping 4 cameras on the back.

The Samsung Galaxy A9 camera is incredible, it looks unique and really stands out from the crowd.

This is the first in any smartphone and Samsung even go as far as saying the phone is ‘optimised for Instagram’.

The Samsung Galaxy A9 Dual-SIM capabilities allow you to place two sim cards into the phone, meaning you can have a personal and business line in one device.

Samsung has stated that the phone will be released some time mid-November so keep your eyes peeled or this four-eyed beauty.

So firstly the Samsung Galaxy A9 design is literally flawless, it is a beautiful looking phone and its classic Samsung. The phone feels premium in your hand with a metal frame and glass around the front and rear.

Samsung has produced the phone in 3 amazing colours; Caviar Black, Bubblegum Pink and our personal favourite have to be the Lemonade Blue.

Weighing in at 183g the phone is pretty light compared to the Samsung Galaxy S9+ or Note 9.

However, the phone does feel pretty big when in hand but it’s comfortable, and not going to be peeking out the top of your jeans pocket when walking around with this thing. 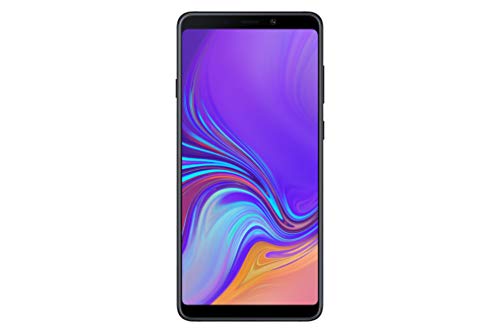 Something we did notice immediately with the phone is that as it is glass on the front and rear it extremely prone to fingerprints, we would definitely recommend a skin or a phone case to keep its slick look.

Samsung has implemented a Bixby button, which is around the left side of the phone, and the fingerprint reader is in a great position, with your forefinger naturally gravitating towards it without any awkward hand cramps.

However, there is no water resistance on the phone. So you will need to be careful when using it close to water, the A9 also has a Face-ID option but it is pretty slow, well slower than unlocking the phone by the fingerprint sensor so we found the fingerprint reader much more convenient.

In terms of display, the Samsung Galaxy A9 boasts a 6.3-inch Super AMOLED Full HD+ display; with 1080 x 2220 resolution the display is more than capable of giving you an all-round fantastic experience when watching Netflix movies or gaming.

Samsung calls the A9’s display an ‘immersive display’ as there is no curvature on the sides, now don’t get me wrong the display is not as fancy as the one found in the S9 or S9+, but it makes colours really vibrant and pop.

Another positive of the display is that there is no notch, although it does have a slim bezel around the phone so it’s not quite edge-to-edge.

When it comes to performance the Samsung Galaxy A9 is packing some heat, it comes with an Octa-Core Exynos 7885 chipset and a huge 6GB of RAM, allowing some smooth navigation and gaming experiences.

Memory isn’t an issue on the A9 as it comes standard with 128GB of internal storage, giving you the ability to store multiple photos, movies and music for easy access.

If you did need more you also have the option to add up to 512GB of expandable storage with a microSD card.

We love the fact that the Samsung Galaxy A9 Dual-SIM capabilities allow you to have a personal, and business line in the same device.

This is ideal for those that have a work phone and don’t want to mess around with multiple phones or sim cards.

However the phone is running Android 8 Oreo which is not the latest of Google’s mobile software, Samsung says that they will bring the Android 9 Pie update to the phone as soon as possible but are still currently working on this.

That being said Android 8 Oreo is still more than capable of operating the phone seamlessly and even when under intense usage situation the phone does not struggle with lag or delay.

Apps load extremely quickly even when having multiple running at once and the phone does not overheat when under stress.

The Snapdragon 660 runs the show and keeps everything in check when the phone is using lots of power for gaming, we tested the phone playing ‘RuneScape’ and had no issues whatsoever even on the highest graphical settings.

Samsung has also decided to keep the headphone jack, which is great news and means you don’t have to go out and buy some wireless ones to be compatible with the phone unlike most iPhones nowadays.

The phone only has one speaker, which is on the bottom of the phone so its nothing really to shout about.

Although when playing games and watching a couple of YouTube videos we found that it was pretty good and didn’t hinder the overall experience we had with the phone, sound quality is crisp and clear.

Now onto the star of the show, the Samsung Galaxy A9 camera is not only a single camera, but its an impressive QUAD camera!

The main sensor is a 24MP f/1.7 with no optical stabilisation, which has lots of megapixels, giving you the best shot possible when in low light situations.

The second is an 8MP f/2.4 aperture with a 120-degree wide-angle lens allowing you to make the most out of every image by getting more in the shot.

This is followed by a 5MP f/2.2 depth-sensing camera which is used to collect data on Samsung’s Live Focus background blur mode.

There is also a 24MP selfie camera around the front to take Instagram worthy pictures of your pretty face!

Now Samsung has said that with the phone not being released just yet that the phone isn’t running final camera software just yet and the camera is set to improve before it finally goes on sale.

One thing we loved about this phones camera is that its super easy to switch between camera lenses with a single tap of the screen, there are multiple modes to choose from, such as Live Focus, Super Slow-Mo and Hyper Laps.

It is incredible to be locked and loaded with such an amazing camera and means you can capture the best possible photo in almost any situation, for example in group photos it is super convenient to switch to the wide-angle lens in order to fit everyone into the shot.

Dynamic range is good and colours good although this does differ massively from lens to lens; we found that when switching the colour reproduction was very different.

As a whole the Samsung Galaxy A9 camera is incredible, it can turn even the most novice photographer into an Instagram worthy snapper with little to no effort.

Given how cheap the Samsung Galaxy A9 can be attained on a contract deal here in the UK we really think this phone is a great choice for those wanting a strong camera.

Slow-Mo is recorded at 720p and 240fps and gives great detail when recording footage, meaning you can capture funny moments of your pets to look back on! We are looking forward to seeing the finished product when Samsung released the phone later this month.

The Samsung Galaxy A9 has a 3800mAh battery, which is bigger than the one used in the S9. The phone will last you for 2 days no problem and average screen on time is around 11 hours!

The phone also supports fast charging which means extremely quick top-ups if you’re in a hurry, the phone will charge from 0-100% in just an hour and a half too.

However, the phone does not support wireless charging so you will need to carry a wire around if you’re going to be away from home for a while.

So is the Samsung Galaxy A9 really worth your money?

Most definitely! If you’re a photographer who loves to be equipped with a range of different camera lenses for every situation then this phone is definitely for you.

The phone has more than enough firepower to handle gaming, running multiple apps and can cope under stress.

The A9 also has a fantastic battery and is able to keep you going for around 2 days with 11 hours of screen on time.

We love the Samsung Galaxy A9 dual sim feature too, allowing you to have multiple numbers in one phone.

Samsung has also given the A9 128GB of storage and the ability to increase that a further 512GB! So storing music, photos and lots of apps to keep you entertained.

Overall the phone is a fair price and really gives users a fantastic overall experience, the A9 is definitely not a hard phone to recommend for those that love to take tons of photos!

We hope you have enjoyed our Samsung Galaxy A9 review, and feel free to leave a comment or maybe even give sign up to our newsletter to receive the most up to date smartphone reviews.

You can also check out the best Samsung Galaxy A9 contract deals at the top of this post..