The Sony Xperia XZ2 Premium phone was released shortly after the XZ2 and is seen almost like its big brother.

The XZ2 Premium is Sony’s most expensive flagship of 2018 costing around £800 in the UK.

The Sony Xperia XZ2 Premium price is certainly not cheap, however can be attained on contract from the likes of EE, for around £30 per month.

The handset is primarily aimed at media-consumers who love to make use of the beautiful 4K display by watching plenty of Netflix, Youtube and Amazon Prime videos.

First of all the design of the XZ2 premium feels very refreshing for Sony and the metal and glass combination giving it a very ‘premium’ finish.

The phone is on the heavier side weighing a hefty 236g, this is pretty mammoth for a 2018 smartphone as they have skipped the thin and slick look, unlike most other flagship phones.

The XZ2 premium is 11.9mm at the core which is almost twice the thickness of an iPhone X.

It’s actually very slippery in your hand and is hard to get used to placing the phone on a seemingly flat surface and watching the phone literally slide away due to the shape of the phone.

The XZ2 Premium has aluminium sides and has Gorilla Glass 5 at the rear giving the user slightly more piece at mind if it was to be dropped from a height. 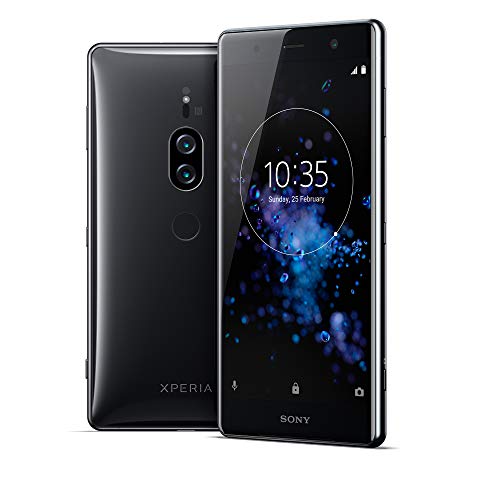 One key aspect of the phone which definitely makes it premium is it’s 5.8 inches 4k HDR Triluminos LCD display, when watching 4K videos on this phone it is clear that this is the main selling point on this phone.

The 4K display makes the whole experience so much better, with brighter more vibrant colours and the incredible details left me in awe.

Much like the Samsung S9 and Note 9, Sony lets you choose how vivid you want the XZ2 Premium screen to look as there is a ‘Professional Mode‘ that calibrated to the sRGB gamut.

Also, a standard mode that offers the slightly punched up tones most people want and Super-Vivid, which maxes out the Triluminos screen.

Dynamic range is absolutely fantastic on the XZ2 Premium and literally has you hypnotised when watching movies or playing games on the phone.

Although the XZ2 Premium runs a very top end Snapdragon 845 chip and also offers 6GB of RAM you would expect everything to be super-fast, and even when running a 4K display this still is the case and the phone tackled seriously intense usage with ease.

General navigation and hopping between apps was no problem and jumping straight to the camera app with the physical camera button was very snappy.

Even when gaming with the graphical settings right up to the maximum ultra frame rate the phone did not struggle in the slightest, giving me plenty of reason to easily recommend this phone for performance.

Now the phone is IP65/68 water-resistant meaning it will survive being dropped in the bath, as you would expect for a 2018 flagship.

Sony has packed the phone with a set of stereo speakers which are actually very good and support for LDAC and Hi-Res Audio.

As with the XZ2 it does have Sonys ‘Dynamic Vibration System‘ which ramps up the feedback to accentuate audio output, giving the impression of a physical bass response which is seriously cool when gaming.

When it comes to the Sony Xperia XZ2 Premium specs, they are pretty impressive. The phone is Dual Sim and has a MicroSD slot that is very easy to open with just using your finger, it comes standard as 64GB but with the MicroSD can support up to 400GB which is a huge amount of storage.

This is necessary as the type of person who would typically buy the phone will be big into video recording and taking lots of photos with its camera.

As like the XZ2, the placement of the fingerprint scanner on this phone is a little strange, your finger just doesn’t seem to naturally sit on the scanner and this can take some getting used to.

The scanner sits far too low and is almost in the middle of the phone, your finger naturally sits where the camera lens is placed and means sometimes when taking photos your finger can easily be covering the shot.

Unfortunately, there is no headphone jack on the phone but you do get an adapter in the box, a lot of companies are now pushing wireless headphones which is a change we are seeing more and more in 2018 and is just something we are all going to have to adapt too.

The XZ2 Premium comes with Android 8.0 Oreo straight out of the box, the notification menu is familiar and you can access Google’s feed by swiping left of the main home screen.

Sony Xperia’s assist app is included and fills the role of an interactive tutorial app although you do have a far more useful Google Assist which is just a press of the home button away.

The Sony Xperia XZ2 Premium specs are nothing short of impressive, having a huge storage capacity with a microSD and being dual-sim meaning you can have 2 numbers in one phone.

Arguably the best feature of the Sony Xperia XZ2 Premium is its very impressive camera, the combination of a 19MP f/1.8 aperture and a secondary 12MP f/1.6 aperture leads to some great photographic capabilities even in low light situations.

Photos are crisp and look extremely sharp with great colours and dynamic range, the images aren’t noisy and are generally great images.

However, there is no optical zoom and the second camera is used to boost the general image quality just like the Huawei phones.

The camera also has a pretty cool Bokeh mode which uses both the cameras to let you blur out the background in photos, however it is a little slow and you can usually see the outline around blurred and non-blurred images.

The camera is great but Sony still has some catching up to do, the XZ2 Premium does perform a lot better in low light than its predecessor but overall the Note 9 and Huawei P20 Pro is definitely a better camera.

Just like the XZ2, you can shoot super slow-motion at 960fps which is fantastic and works really well.

The Sony Xperia XZ2 Premium has a 3540mAh battery which doesn’t actually last that long, this is due to the 4K screen and the chipset that is on the phone.

For an extremely bulky phone, this is very disappointing and you would expect more from the battery.

You can expect the phone to last a full day but only on low brightness settings, Sony does have a cool stamina mode which helps keep the battery going but overall its a poor part of the phone.

However it does offer fast charging but it’s not so fast, it takes exactly 2.5hours from 0-100% charge, wireless charging is also supported on the XZ2 Premium.

Overall the phone is good and really stands out from other phones due to its marmite design and 4K display, but for a flagship, at this price, there are certainly other contenders such as the Huawei P20 Pro or the Samsung S9 Plus.

The phone has a good camera and takes clean shots almost every time, however, this is only if your finger doesn’t get in the way of the lens as the fingerprint sensor is way too low.

The price of the Sony Xperia XZ2 Premium is rather expensive too, for this price you could almost get the newer Sony Xperia XZ3, which makes this phone a questionable purchase.

Battery life is a big let down on the XZ2 premium and will drain extremely quickly due to the 4K displaying draining all the juice.

The Sony Xperia XZ2 Premium specs are strong, offering a high performing phone that can handle almost anything you throw at it.

But media heads who are big into photography and taking video footage will love this phone, people who love to watch Netflix or lots of Youtube, this is one of the best phones on the market for that.

We hope you have enjoyed our Sony Xperia XZ2 Premium review and feel free to leave a comment and give us some feedback.

You can also check out the best Sony Xperia XZ2 Premium deals in the UK at the top of this post.