When released it was priced in the UK at the £650 mark, now in 2019 its around £350, and for that you get a solid all-around phone with a great camera and display.

The Sony Xperia XZ2 camera has also had some impressive upgrades, allowing even the most novice photographer to take Instagram worthy shots.

Check out the best Sony Xperia XZ2 deals here in the UK.

So firstly the Sony Xperia XZ2 design is different and feels a little better in your hand than previous models, this is due to the slightly rounded corners and the curvature on the back of the phone.

However, this can get really annoying as the phone does not balance on a flat surface.

The XZ2 feels slightly heavier than previous models as it is now 198g giving it a more bulky feel but also making it feel more premium.

It has a glass front and rears with an aluminium frame running around the edge.

Sony has decided to remove the 3.5mm headphone jack and they have placed the fingerprint reader just below the camera in an awkward location as it really does take some getting used to and most of the time your finger will naturally rest over the camera lens. 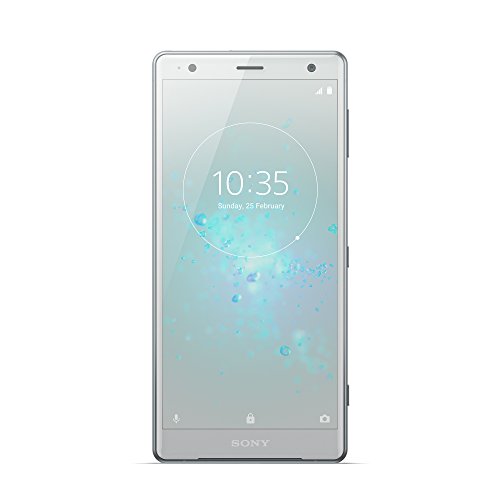 You may be wondering, is the Sony Xperia XZ2 waterproof? Yes, it has an IP68 rating. This means it can survive being submerged at a depth of 1.5m for 30 minutes.

Sony has really pulled it out the bag in terms of the display of the phone, it’s bright and colourful and everything you would expect from a full HD display.

The screen does support HDR10 meaning you can watch Netflix, Youtube or Prime videos in high dynamic range giving you more rich colours.

The XZ2’s display this phone is spectacular and is easy to recommend to anyone who enjoys lots of videos on their phone.

The XZ2 does have the latest Snapdragon 845 chipset giving no reason to complain about performance, it is snappy and very responsive and allows for a great overall experience.

Graphically intense games are no problem for the XZ2 and coupled with the HD display, we found it to be very enjoyable gaming for long periods of time.

Sony has decided to run the phone on Android 8 Oreo, which is the latest version of Google’s mobile operating system, ensuring that the phone is up to date and ready to use right out of the box.

The phone has a very stock Android feel and if you are familiar with Android phones such as Samsung or Huawei you will have no problems getting to grips with the Xperia XZ2.

Audio quality for the Sony Xperia XZ2 is really something to brag about, as they are now 20% louder than before, music and games sound extremely clear.

The “dynamic vibration system” makes the sound of the video collaborate with the vibration of the phone giving you an immersive experience, you can adjust the intensity so that when watching action-packed movies it isn’t making your hand cramp up.

When it comes to the Sony Xperia XZ2 camera, it features a new 19MP, f/2.0 aperture motion eye camera which focuses on great photography and 4k video recording.

The primary lens produces great results however it does struggle in low light with colour accuracy.

When compared to the Samsung Galaxy S9 (which is the XZ2’s main competitor) the S9’s camera was a lot better in almost every aspect.

The second lens is a 5MP selfie camera which produces some great images too, they are sharp and full of detail as you would expect from a premium Sony phone.

The star of the show for the XZ2 is the video, it can record 4k 10bit HDR in HLG format, this makes videos look stunning.

This phone is the first in the world to shoot full HD super slow-mo video, which is 960fps@1080p, this is very impressive but it is very hard to use as it only records for 0.1 seconds at a time.

When recording in 4K the handset does get very warm and there is a warning message which will pop up on the phone to make you aware of this, this problem has plagued Sony phones for years and it appears there is still no resolution just yet.

The Sony Xperia XZ2 battery life was very surprising, it has a 3180mAh battery, it will last a full day on a single charged and also comes with wireless charging allowing for very easy top-ups throughout the day, although you do need the wireless pad for this.

You could expect to watch 2-3 movies with full brightness and still have a charge at the end of the day.

Sony has also implemented ‘Smart Stamina‘ which predicts how much battery you have left and allows you to keep track to avoid running flat.

The phone also prompts you when the best time to activate ‘Stamina mode‘ which allows you to adjust the power usage.

Qnovo adaptive charging checks your battery health as it charges and adjusts the levels of power in order to keep the battery strong and protect its overall capacity.

Overall the XZ2 is a great phone and if you can grab a bargain, we would definitely recommend it, aside from the phone sliding around everywhere when on certain surfaces which is very annoying it has a lot to offer.

The Sony Xperia XZ2 is waterproof, meaning you don’t need to stress too much if you drop it in the tub.

One of our favourite aspects of the device has to be the Sony Xperia XZ2 camera, it is great and can really produce some social media ready shots, with no effort.

The camera is great and the 4K recording is a cool feature, but the display really brings a lot to the table for those who watch a lot of Youtube videos or Netflix on their phones.

A great phone for those who love to enjoy watching and recording videos on their mobile device.

We hope you enjoyed this review, and feel free to leave a comment, and check out the best Sony Xperia XZ2 contract deals at the top of the post.